Are You Not Happy?

The whistle sounds and the curtains close on a fierce battle. In their fight against Tenjiku, Jinko has achieved victory. At dinner after the game, Jinko finds themselves unable to celebrate their victory. However, when Komori asks the team, “Aren’t you happy?”, Sekizan and the others boil over with delight. Later Komori makes good on his promise to take Yoshida drinking, but at the bar they encounter…! 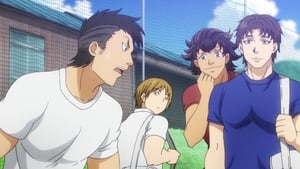