The Jinko rugby club’s training camp has begun. As the team engages in intense practice, an old man appears and tells them they’re wasting their time. The harsh words of former national team coach Komori Shingo leave the team at a loss. Meanwhile, Sekizan asks him what the team is lacking. Will Komori become the savior of the leaderless Jinko rugby team? 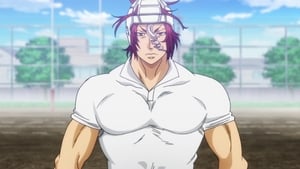