Reach a Decision! The Up and Down of Heaven and Hell

Astraea gets enrolled at Tomoki’s school and tries unsuccessfully to dispatch of him. Later on, Nymph, Mikako, Sohara, Tomoki and Astraea join in a quiz competition to determine that Tomoki himself is not an ‘idiot’ as labeled by his schoolmates. His attempt proves futile and the events leave him to be an ‘idiot’ to the whole city than just in the school before. Astraea finds herself spending time with the group and acceptance which adds onto her dilemma and Daedalus discovers that Chaos, the new second generation Angeloid has been sent to Earth. 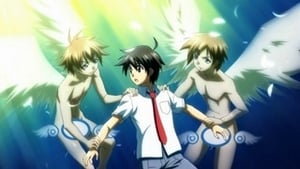