The last three djinn are proving formidable foes when Black Adam shows up again with a vengeance. With the help of John Constantine, Plastic Man, Swamp Thing and Shazam the League puts in a team effort to stop Black Adam and the djinn. At the site of the battle the watchtower is built as a replacement HQ. Part four of a four part episode also known as Shazam Slam. 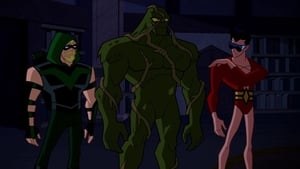