Ash’s friend Richie has come to Professor Oak’s lab to ask for advice, but Tracey is the only one home; the Professor is on Seafoam Island for a live TV appearance. At least, that was the idea—when Tracey calls for an update, DJ Mary tells him that Professor Oak has vanished! Tracey and Richie head to the TV station to find out what happened. According to DJ Mary, Professor Oak made it to the morning rehearsal, but after two strangers pulled him away to ask a question, he was never seen again! Security didn’t see the Professor or the strangers leave the station, but Richie realizes that the kidnappers posed as deliverymen to get in and out of the building. Indeed, it’s just as Richie thought, and Butch and Cassidy are the ones behind the plan. Dr. Namba wants to force the Professor to tell him where to find Pokérus. Namba needs samples of the Pokérus virus to help him with the Pokémon Power Acceleration Project, but Oak refuses to give up the information. To get him to talk, Butch and Cassidy torment him with the sound of a nail on glass. But Richie sent his Taillow, Rose, to look for a suspicious delivery truck, and that leads the good guys straight to Team Rocket’s hideout. When the rescuers burst into the hideout, Cassidy and Butch use Sableye and Mightyena to battle Tracey’s Scyther and Richie’s Pikachu, Sparky, while they grab the Professor and run for it. Tracey’s Scyther is defeated, but Richie sends in his Charmeleon for additional firepower. Between that and Sparky, it isn’t long before Butch, Cassidy, and both of their Pokémon are blasted into the sky. With Officer Jenny’s help, Professor Oak and DJ Mary are back in time for their live TV show, and Richie even has an invitation to visit the Professor’s lab and help him out: a happy ending for everyone! 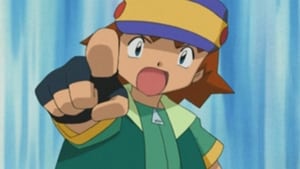