Richie and Sparky are in the big city, where the nearest Pokémon Center is scheduled for demolition. Two Nurse Joys—a grandmother and granddaughter—are trying to stop the demolition crew, so Richie and his Pokémon step in to drive off the crew’s Pokémon. The Nurse Joys tell him that this Pokémon Center opened 75 years ago, back when the area was a rural place where Celebi lived. That was the same day the elder Nurse Joy’s friend, Nick, was lost in a landslide. That night, a Celebi appears before Richie and shows him a Celebi carving hidden in the Pokémon Center’s furniture. Then Richie is surrounded by light, and the next thing he knows, he’s in the middle of a forest! Richie hears a cry for help, and he rescues a young Joy from falling off a cliff. Joy leads him to the local Celebi shrine, where he’s introduced to her friend Nick. Richie is in the past—and it’s the day before the Pokémon Center first opened! Nick invites Richie to stay with him and his father for the night. They’re traveling carpenters, and they’ll leave tomorrow now that their work on the Center is complete. Nick is carving a Celebi statue for Joy but he won’t stay for the Center opening and her birthday party, even after Richie tries to convince him to go. That night, in the middle of a storm, Joy goes missing and everyone in town is looking for her. Nick thinks she’s in the forest, so he and Richie go to look for her. They find Joy unconscious, knocked out by a falling tree on her way to check the Celebi shrine. Lightning threatens to set fire to the shrine, and Nick is almost hit by lightning himself as he tries to stop the flames. But Celebi appears to protect him and Joy is so touched, she decides to become a nurse and stay at the Pokémon Center. The next day, Nick doesn’t show up at the party, so Richie takes Joy’s Ponyta and rides off to find him. Nick and his father are on a cart headed out of town, but Richie forces them to stop. He tells Nick to be brave and give the Celebi carving to Joy, so Nick and his father turn around just in time to avoid a deadly landslide. As Nick gives Joy his gift and admits his feelings for her—feelings that are mutual—Celebi whisks Richie back to the present. Now, the Pokémon Center is being restored, not demolished, and Nick is the town mayor. The concrete jungle has been replaced with a pleasant, tree-filled town, and Celebi even makes a special appearance before the townspeople. 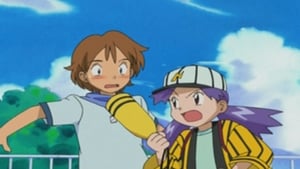