In the middle of being blasted off again, James finds a bottle cap from his training days that starts everyone reminiscing about being Team Rocket trainees. Jessie was a problem trainee, unable to work with any partner for long. Meowth walked into Giovanni’s office, asking to be made a Team Rocket field agent. And Butch and Cassidy were trainees, too—Cassidy was Jessie’s constant rival. Drill Sergeant Viper ordered Jessie to start training with her new partner, James, and Meowth was assigned to their team after Giovanni lost patience with its incompetence. In their first team challenge, they had 24 hours to reach a target location in the wilderness, surviving on a loaf of bread and bottle of water per person. When Meowth ate all its food right away, James shared his food with Meowth. Jessie sniffed at such sentiment, but when they made camp that night, she reluctantly shared her own food with the other two. The next day, the trio had to cross a rickety bridge. Jessie made it across, but the bridge collapsed beneath Meowth and James. Although Jessie grabbed them just in time, James let go and fell into the river below, thinking it was for the best. His injuries put him out of action for the final trainee test: a real heist job to steal a red Snorlax from an office tower. But to Jessie’s surprise, James showed up for the mission anyway. Nothing would keep him from being there for his team! The only teams left were Jessie, James, and Meowth against Butch and Cassidy; in the final room, Butch and Cassidy fell into a pit trap, and James and Meowth almost fell in as well. This time, Jessie grabbed her partners and wouldn’t let go, even when the building’s alarms went off. As soon as she pulled them to safety, they started to make off with the Snorlax, but time was up—and the Snorlax was Drill Sergeant Viper in disguise! Not only did Butch and Cassidy pass, but Jessie, James, and Meowth also become real Team Rocket agents for getting as far as they did. Back in the present day, Team Rocket is still blasting off after another failure, but no matter what, they’re still a team! 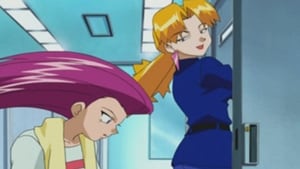