Journey to the Starting Line!

A peaceful day at Professor Oak’s lab turns into chaos when a series of small incidents leads to a Tauros stampede! The mayor’s son, Gilbert, is supposed to receive his first Pokémon, but the Tauros broke through the walls of the lab and now the starter Charmander, Squirtle, and Bulbasaur have all escaped. And when Gilbert does show up, he has a lot of attitude but very little affection for Pokémon: he just wants something cool and powerful, not a Kanto starter Pokémon! However, everyone’s first priority is to catch the runaway Pokémon. Tracey and Ash’s mom Delia will go one way, Professor Oak, Gilbert, and Ash’s Bulbasaur head for the mountains. In the forest, Tracey and Delia rescue Charmander from a stream. Up in the mountains, Gilbert is scared of the high, narrow path, and is ready to walk away even after he spots Squirtle stuck on a tree overhead. But when Gilbert falls off the path, Bulbasaur saves him—and when Professor Oak catches Squirtle but nearly falls off too, Bulbasaur makes another save. Then Bulbasaur plays with Squirtle to reassure it after its big scare. This gets Gilbert thinking about Bulbasaur’s loyalty, and he even tries to play with Squirtle himself. As for the missing Bulbasaur, it’s been seen all over town. Now it’s hiding in a tree, cornered by a bunch of wild Primeape! Gilbert is about to abandon Bulbasaur too, but Professor Oak tries to rescue it. When Gilbert sneezes, he tips off the Primeape to the rescue and they all attack! Gilbert and the little Bulbasaur wind up trapped by the Primeape at the edge of a cliff, but Ash’s Bulbasaur jumps in to protect them. It hoists Gilbert and the little Bulbasaur to safety, and then scares off the Primeape. Back at the lab, with everything back to normal, Gilbert decides the Kanto starter Pokémon aren’t so bad after all. He decides to stick with the little Bulbasaur. He’s learned a lot from the example set by Ash’s Bulbasaur, and he even thanks it as he heads off on his own Pokémon journey! 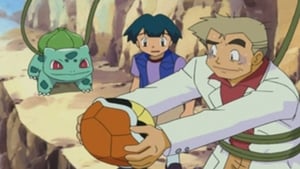