Luvdisc Is a Many Splendored Thing!

Team Rocket agents Butch and Cassidy have just received their latest orders: steal a Luvdisc from the Cerulean Gym! There are two Luvdisc at the Gym, including a new one that Daisy brought, and Tracey has stopped by the Gym to take a look. The Luvdisc are Luverin and Kasurin; Kasurin likes Luverin, but Luverin’s not interested. This could jeopardize the romantic underwater show that Daisy has planned, but things only go truly awry when Butch and Cassidy break into the Gym, grab Luverin, and run for it. Kasurin is able to sense Luverin, so Daisy, Tracey, and Misty take Kasurin with them and set off after Team Rocket by car and inflatable raft. Kasurin tracks Luverin to the scattered islands where Team Rocket have a secret lair, but Butch and Cassidy know the good guys are coming. They steal Kasurin, them dump our heroes in a pit trap! What’s worse, Misty and Tracey left all their other Pokémon at home, so Misty must encourage the two Luvdisc to break out on their own. Butch and Cassidy chase after the escaping Luvdisc, leaving Tracey free to figure a way out of the pit trap. Outside, the two Luvdisc have jumped into a river to escape, but Butch and Cassidy block off their part of the river with nets. Just in time, Misty and the others run to the scene; Misty and Daisy team up to order the Luvdisc to fight back against Team Rocket’s Mightyena and Sableye. Team Rocket is no match for twice the teamwork and the Love Love Water Gun combo, and they’re soon sent sailing out of sight. Even better, Kasurin’s heroics have won Luverin’s heart, and the duo become stars of Cerulean Gym’s romantic underwater show, spreading joy and happiness everywhere! 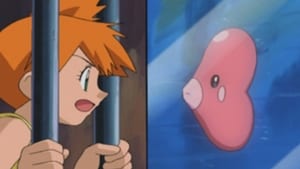