The Search for the Legend

Richie is on the S.S. Anne when a school of wild Gyarados block the waters ahead. The crew is about to take the long way around, but a grizzled Trainer named Silver orders his Salamence to send the Gyarados packing so the trip can continue. Silver also has a Chikorita, and a lifelong mission: to battle the Legendary Moltres! But Richie thinks there’s something suspicious about the two researchers with Silver, especially when the ship docks at an evacuated volcanic island and Richie sees the three of them sneaking onto the shore. Richie jumps ship and follows them, convinced something is up. When he catches them headed for the top of the volcano, they tell him Moltres should appear at this volcano tomorrow. The researchers want to sample Moltres’s fire for scientific reasons, so they enlisted Silver’s help—and they don’t want Richie tagging along. However, Richie later overhears the researchers talking, and they’re really Butch and Cassidy! Richie tells Silver that something is wrong, but Silver doesn’t care; he likes Richie’s stubbornness and even lets Richie join the group. The next day, they make it to the top of the volcano and see Moltres flying straight for them. Silver orders Salamence to battle it, but Moltres’ fire attacks seem unusually weak. That’s because it recharges its energy at the volcano, and Butch and Cassidy want to snag it while it’s weak! When Silver refuses to do their dirty work, Team Rocket gets out Cloyster and Tentacruel to help capture Moltres in a net. When Silver comes to Moltres’ aid, Team Rocket stick Silver and Richie in a net, too! But Silver’s Chikorita cuts open the net, and Richie’s Pikachu blasts Team Rocket into the sky. Moltres plunges into the volcano’s lava and emerges fully refreshed. Silver insists on a battle, even though the volcano is about to erupt beneath him. But he rethinks his position after Moltres saves him from being crushed by falling rock; he has Salamence fly him and Richie to safety. Moltres has flown away, but Silver will wait for Moltres. If Richie stops by the island again someday, they can have a battle too! 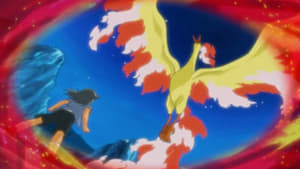