The Pichu Bros. are having fun playing with Pokémon friends Smoochum, Magby, Wooper, and Teddiursa. But when the Pichu Bros. start to argue with each other, it gets out of control and everyone gets zapped with electricity! That stuns the Pichu Bros., and one Pichu falls on a skateboard that rolls away. It rolls so far away, nobody knows where that Pichu is. When Pichu wakes up, it starts to return to its friends, but gets distracted when it sees a balloon seller. Pichu tries to take all the balloons, except the balloons end up taking Pichu for a ride up into the sky! Meanwhile, Pichu’s brother and the other Pokémon have found the skateboard, but no sign of the missing Pichu. As they search the area, the lost Pichu spots them and cries for help. Even though they hear it, they don’t think to look up. Once they do spot Pichu, the breeze keeps blowing Pichu further and further away. The Pokémon friends chase after it, but they end up stumbling across a grumpy Houndour, falling into a canal, and being saved by a Feraligatr—while Pichu is still stuck floating through the air. A Murkrow sees the balloons and begins to pop them with its beak. This means Pichu is losing altitude, but not fast enough—the last balloon pops when Pichu still has a long way to fall! Luckily, Teddiursa and Wooper are there to cushion the fall, and everyone returns to their alley hangout. The Pichu Bros. start fighting again, and Magby brings in Azumarill to help stop the fight. But when the Pichu Bros. accidentally zap everyone, Azumarill is the angriest one of all! And once Azumarill is mad enough use Water-type attacks, Smoochum and Magby lose their temper and start using attacks too. But the combination of water, ice, and fire creates twisting ice slides, and soon the fighting is forgotten. It’s time for everyone to have fun playing on the slides, the way things should be! 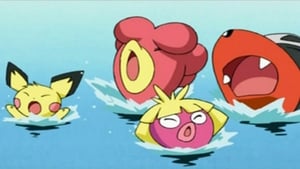