A Family That Battles Together Stays Together!

Brock is back in Pewter City after his adventures in Johto, but he finds his father Flint hiding at the edge of town. Flint warns him that something terrible has happened: Brock’s mother Lola took over the Pewter Gym and turned it into a gaudy Water-type Gym! When Brock sees this, he’s furious, but Flint is afraid to act and Lola won’t listen. So Brock declares that Flint will battle Lola for the Gym—if Lola loses, the Gym goes back to the way it was. But if she wins, all of Brock’s siblings will become Water-type Trainers! With the Gym now a watery battlefield, Flint’s Golem is at a disadvantage. Once Lola’s Marill uses Surf, Golem sinks like a rock, and Lola’s Blastoise has to fish it out of the water. When Flint starts to walk away, dejected, Lola reminisces about their first battle together. This rekindles their love, but Brock doesn’t care. He’s not even impressed when Flint and Lola try to patch things up by making the Pewter Gym a Rock-and-Water-type Gym. Brock’s brother, Forrest, isn’t happy either; he throws a fit and runs out of the house. Forrest doesn’t want to be a Gym Leader now that the Pewter Gym isn’t a Rock-type Gym, but Brock assures Forrest that he’ll fix it. The next morning, Brock insists on battling Lola for the fate of the Gym. Brock chooses Onix, and Lola chooses Mantine. Brock has Onix use Dig to drain all the water from the battlefield, but Mantine can still swoop through the air and use Water-type attacks. Still, the battle doesn’t last long before Onix knocks out Mantine, and now the Gym is back to being a simple, no-frills Rock-type Gym. As for the family, they don’t seem to mind. They give Brock a hearty send-off as he heads out to Hoenn, and Forrest promises to battle Brock the next time he returns! 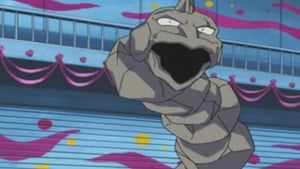