Misty has returned to Cerulean City to step in as the Cerulean Gym Leader. But as soon as she arrives, she hears a news report about the Pokémon Investigation Agency closing Gyms that fail to meet proper standards—and rumor says Cerulean City is their next stop! Unaware that three of her enemies are in town, Misty rushes to the Gym and finds an out-of-control Gyarados in the pool. Neither Nurse Joy nor her sister’s fan club can control it, and she can’t just stick it in its Poké Ball while it’s still upset. It’s Misty’s duty as Gym Leader to solve the problem, except she’s also had a Gyarados phobia ever since she was a baby! Misty puts on a water show costume and swims in the pool, hoping to stir Gyarados’s memories of performing together back when it was a Magikarp. Instead, Gyarados turns the pool into a raging whirlpool, and Misty blacks out. As her Horsea rescues her, she dreams of Ash and Brock telling her she can do this on her own. When she comes to, however, she reluctantly puts Gyarados in an underwater cage, hoping to protect the other Pokémon. But all this time, her three foes—the Invincible Pokémon Brothers Kim, Kail, and Kai—have been spying on her, and this is their ticket to taking over the Gym! Right then and there, Kim challenges her for leadership of the Gym and invites everyone in the city to watch. Misty has no choice but to accept, and she sends out Staryu. Kim’s Hitmonchan pretends it can’t swim, and when Staryu goes to rescue it, it knocks Staryu out with one hit! Nurse Joy, the referee, declares this an illegal trick and gives Staryu the victory. Next, Corsola faces Kim’s Tentacruel, but the other two brothers send out their own Tentacruel and have them gang up on Corsola. Outraged, Nurse Joy disqualifies the brothers and bans them for cheating—but to force her to reverse her ruling, the brothers simply turn their Tentacruel on Gyarados! Misty jumps into protect Gyarados, taking the brunt of the Tentacruel attacks. Gyarados breaks out of the cage and saves her, then blasts the brothers and their Tentacruel right out of the Gym. Nurse Joy reveals herself as a Pokémon Inspection Agent, and the Cerulean Gym has passed her test. Now that Nurse Joy is headed to Hoenn, Misty asks for a favor—if Nurse Joy sees a Trainer named Ash, tell him that Misty is a real Gym Leader now! 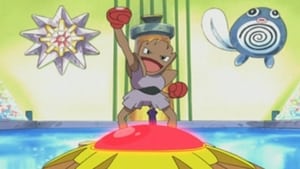