From his castle high on a hill, a mad scientist dispatches a giant robot to the village below. The villagers sound the alarm, afraid that the robot will ruin their crops, and a girl named Kate hopes that the angels of justice will save her village. Instead, Team Rocket—fresh from being blasted off by Pikachu—land right in front of the villagers, and Kate mistakes them for the superheroes known as Team Righteous. To convince the villagers of their villainy, Team Rocket knocks the robot out of commission. That just convinces everyone that they really are heroes! The grateful villagers tell Team Rocket that the stranger in the castle keeps sending robots to destroy their fields during the harvest season, and they want Team “Righteous” to protect them. Surprisingly, Jessie thinks this is a great idea; they’ll fool the village and turn it into Team Rocket territory. Meowth makes a Meowthmobile mecha out of the robot they destroyed, and Team Rocket heads for the castle. After a brief battle with another robot, they get inside and discover the robot’s creator, Professor Brown. Professor Brown is a shy inventor who actually built the robots to make friends with the villagers and help with the farm work. Team Rocket figures they can use this to their advantage, but now a swarm of Taillow is headed for the fields. This could destroy the harvest, so Professor Brown uses one of his devices to add rocket power to the Meowthmobile. Once the Meowthmobile flies up to the Taillow, Team Rocket is out of ideas, but Professor Brown uses his device to vacuum up the Taillow and save the harvest. Now he’s the new hero of the village! Kate still wants James to stay, and James wants to stay too—except he accidentally launches Team Rocket and the Meowthmobile back into the sky. At least the people of the village will always remember them as heroes! 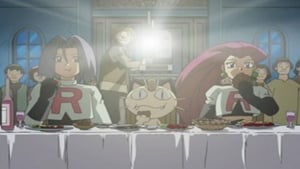