Showdown at the Oak Corral

At Professor Oak’s lab, Tracey and the Professor are busy with their daily work. So busy that they don’t even notice when a Team Rocket helicopter lands on the property—Butch and Cassidy are here, and they plan to steal all the stored Pokémon from the lab! While Ash’s mom Delia stops by to say hello to Professor Oak, Butch and Cassidy put on Pokémon disguises and make their way toward the lab. The local Pokémon take an interest in these new visitors, thinking they’re real Pokémon, but an Oddish realizes the newcomers are just people in costumes. Oddish alerts Bulbasaur, who decides to take action. It grabs Tracey and sends Noctowl to scout the area for signs of the intruders. By the time Tracey realizes what’s going on, Butch and Cassidy have already looted the Poké Balls from the lab and left the building. Now they’re back in their Pokémon disguises and headed for the helicopter, but they’re slowed down by a lovestruck Nidoking and an affectionate Muk. In the meantime, Noctowl has led Tracey to Team Rocket’s hidden helicopter, and Totodile has told Professor Oak and Delia about the emergency. All the Pokémon are on the lookout for the thieves, too! Our heroes all surprise Butch and Cassidy before they can get away, but the villains won’t give up. They send out Hitmontop and Houndour, so Professor Oak calls on Bulbasaur for help. And when Tracey’s Scyther and Delia’s Mr. Mime join in, it spells defeat for Butch and Cassidy, who end up being blasted into the sky. Now the Poké Balls are safe and peace has been restored! 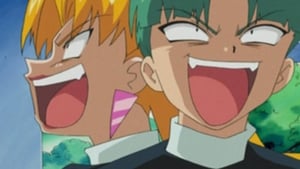