When They Cry: Season 3 Episode 1

Realizing that he forgot to pack his bathing suit while rushing to meet his friends at the pool, Keiichi borrows a pair of trunks from Mion’s uncle, who claims that these trunks have the magical ability to make women attracted to whoever writes their name on them and wears them for three hours. Later, Mion hears from her uncle that he had made a mistake in describing the abilities of the trunks, revealing that the person whose name is written on the briefs will fall in love with the wearer, meaning Keiichi, who had written his own name on them, will fall in love with himself. Not wanting Keiichi to become a narcissistic jerk, the girls try to talk him out of taking the trunks off, though Keiichi thinks it’s a trick so they can force him to wear an embarrassing pair of trunks they provided. Knowing Keiichi won’t go down without a fight, the girls rally everyone at the pool to chase him down and retrieve the trunks by force, even going as far as turning Keiichi’s only supporters (Tomitake, Oishi, and Irie) against each other and fight over wearing the trunks for themselves. Finally, the trunks are removed before time runs out, though the naked Keiichi still refuses to wear the girls’ embarrassing trunks. 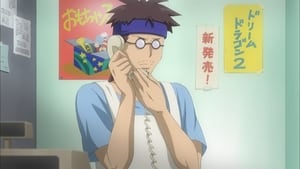