Bloom contacts Annabelle and learns that she had found a similar pocket watch dropped by a guy who had broken into her apartment and then escaped. The Winx head to Paris to recruit a fashion design student named Sophie. Sophie is reluctant to join and dislikes Stella’s style, so Stella suggests they have a contest to see who has the better style. During the contest, Stella encourages Sophie to design the dress of her dreams. Sophie is invited to have the Winx model her new design at a show. Crocodile Man kidnaps Sophie. Although they defeat Crocodile Man and rescue Sophie, they discover she is acting differently and Bloom gets a vision that the real Sophie is trapped in the world of dreams. 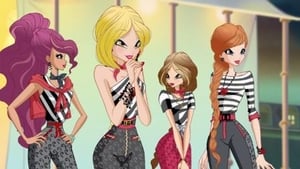