Aoi Zaizen works as a Charisma Duelist under the alias Blue Angel in LINK VRAINS. In order to gain recognition from her brother, Akira Zaizen, she publicly challenges Playmaker to a Duel in LINK VRAINS. However, Playmaker did not respond to her challenge. Instead, the one who appeared before her is Specter, who has disguised as her fan! 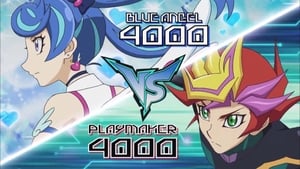